The need to repair, upgrade or replace infrastructure bridge elements is increasing due to the aging of their materials and the expanding volume of traffic. Setting up bridge repair priorities is not a trivial task. This currently depends on the judgment of experienced inspectors. This approach is in fact very subjective since bridge health rating varies from one inspector to another. Alternatively, this proposal intends to integrate the objectivity of computer simulations into the subject of predicting consistent health index. This is expected to help bridge maintenance engineers and owners make realistic data-driven decisions about the relative health and damage of bridges to address the question of which bridge to repair first. In this study, the proposed methodology comprises a two stage process. The first stage involves the generation of tens of thousands of simulations of a simple girder to mimic most possible cracking scenarios involved while generating stiffness values of damaged and healthy girder at specific stiffness nodes. Then, stiffness values of the damaged girder are normalized by their healthy counterparts. By integrating these stiffness ratios along the span of the girder, an objective health index ranging (0-100%) is derived. The outcome of this stage of the process involves the establishment of a vast database that links the stiffness ratios generated to the cracking scenarios and cracking parameters varied. The second stage involves training an artificial neural network (ANN) model for pattern recognition. Once trained, the neural network will be used to predict the stiffness ratios from the cracking parameters determined by visual inspection to yield a single objective health index, which will be used to compare different damaged bridge girders. Once the ANN model is trained, it will be loaded on tablets and tested in the field against the subjective visual evaluation of three different inspectors.

Damage patterns will be limited from a minimum of five cracked zones per girder to a maximum of ten cracked zones per girder. This will amount to over 100,000 linear elastic FE simulations to cover a wide range of geometric, material and cracking variables. A python code will be developed to control the ABAQUS engine to generate the automatic mesh of cracked girders, run the generated file and produce the results and store them into a database. A similar code has been successfully applied to girders with a single or dual crack. Once the database is generated, which requires a large amount of computational power, the data will be ready for neural network modeling.

A finite element model database of 3D simple reinforced concrete T-beams having zero to five cracks was produced. The database was established by varying beam geometric, material, and cracking parameters. A small number of healthy beams having zero cracks were created to provide reference results. A large number of beams having one crack were created, and smaller numbers of beams having two to five cracks were generated to promote artificial neural network interpolation. Stiffness was measured through application of defined static loads at nine equidistant nodes along the top face of each beam, and damage was quantified by computing the ratios of stiffness between cracked and healthy beams. An elevation view of a sample beam with two cracks displaying geometric properties, stiffness node locations, and the five cracking zones (segments) is shown below:

A health index parameter was defined by approximately integrating the area under the stiffness ratio profile over the span length of each beam. The health index is described graphically for a sample beam with five cracks in the figure below:

The software Abaqus was used to create the finite element beam models, and Python scripts were written to automate the generation and analysis of the models. The final database consisted of 11,448 beams, and each beam required the generation of nine models, corresponding to the number of stiffness nodes. This resulted in the generation of 103,032 finite element models. The database was expanded to 42,840 beams by varying the crack location parameter in zones absent of cracks without the need for additional modeling according to the procedures outlined in the M.S. thesis provided.

The current database can be viewed here.

3D Abaqus views of sample beams depicting cracks, loading conditions, boundary conditions, and the finite element mesh can be seen in the figures below: 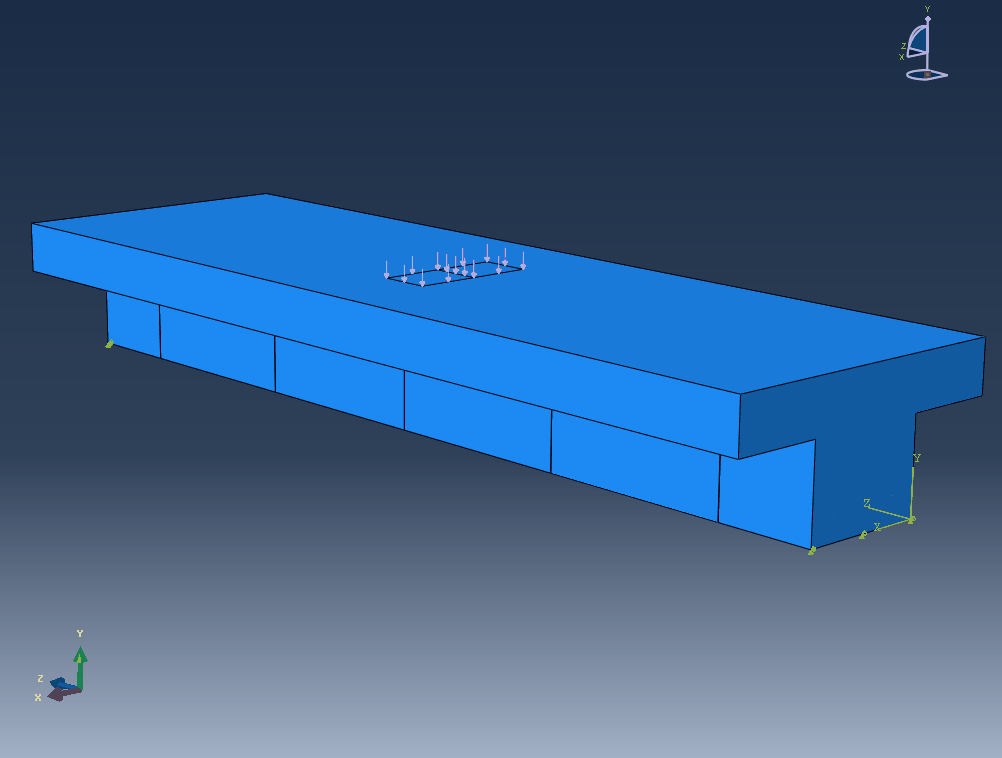 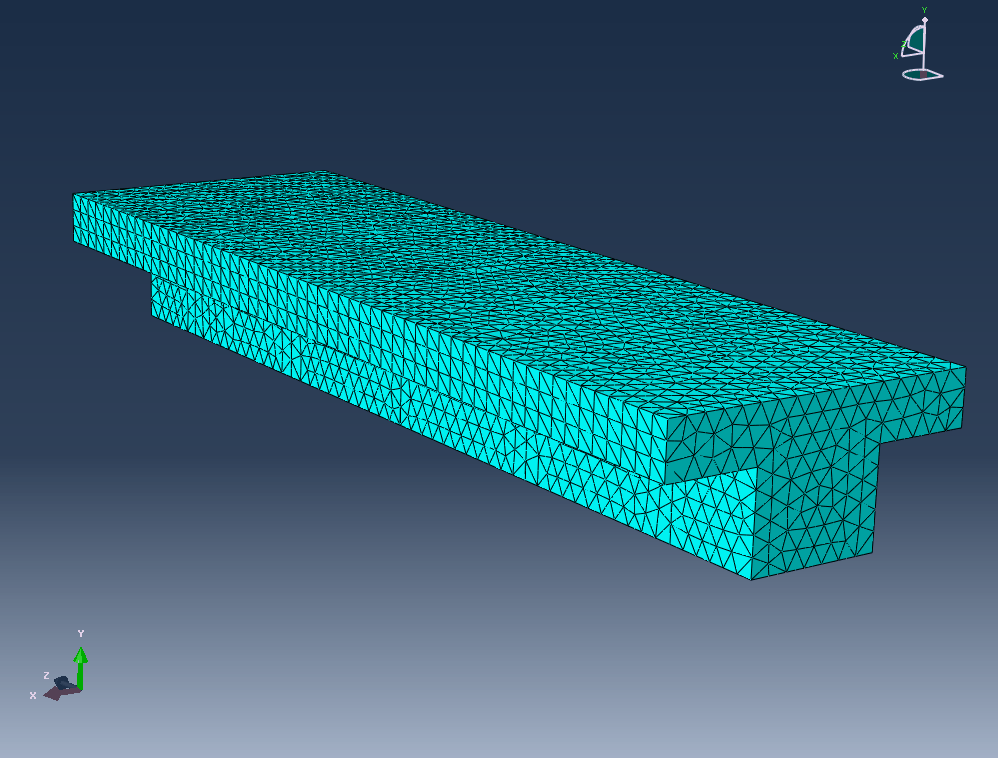 The damage database will be used to train, validate and test a neural network algorithm to memorize the stiffness ratio distributions for different crack patterns and predict these distributions for other crack patterns within similar ranges. Successful applications of the present methodology have been performed for a single and dual crack in simply supported girders. The fully trained neural network model can re-produce the task of hundreds of thousands of FE simulations in a small fraction of the computational time involved with a superb accuracy.

A feedforward artificial neural network program utilizing a backpropagation algorithm, provided by Dr. Yacoub Najjar of the University of Mississippi, was applied in developing two damage evaluation artificial neural network models. Both models accepted the beam geometric, material, and cracking parameters as inputs. The outputs of the first model consisted of the nine nodal stiffness ratios, and the sole output of the second model was the health index. Both models achieved excellent prediction accuracies (R2>0.98) over the data in the main FE model database. Smaller databases of beams with intentionally dissimilar and randomly-generated geometric, material, and cracking parameters were generated to further test the prediction capabilities of the damage evaluation artificial neural network models. Both nodal stiffness ratio and health index prediction models displayed reasonable prediction accuracies (R2>0.8) when tested on the additional datasets. Furthermore, the models' predictions were generally conservative - predicted nodal stiffness ratios and health indices were typically lower than the actual measures of health from the finite element models.

The developed ANN computational module will be programmed in a mobile device App to make it easy to install and run on any Tablet PC platform. The resulting software will be delivered to MTC and a webinar will be made nationwide to introduce the software to the toolbox of FHWA.

The connection weights established by the fully-trained nodal stiffness ratio and health index prediction models were extracted from the artificial neural network program. These connection weights were used to automate the artificial neural network calculations within a touch-enabled user interface application. The application was programmed using Visual Studio 2015 software, a WPF application framework, and the C# programming language.  The application is intended to function as an on-site damage evaluation tool and can be run from an executable file on all Windows 7 or newer touch-enabled devices. Users simply need to input the beam geometric, material, and cracking parameters to obtain artificial neural network predicted nodal stiffness ratios and health indices for any bridge T-girder.

A screenshot of the application, which was given the acronym BRIDGES, is shown below: 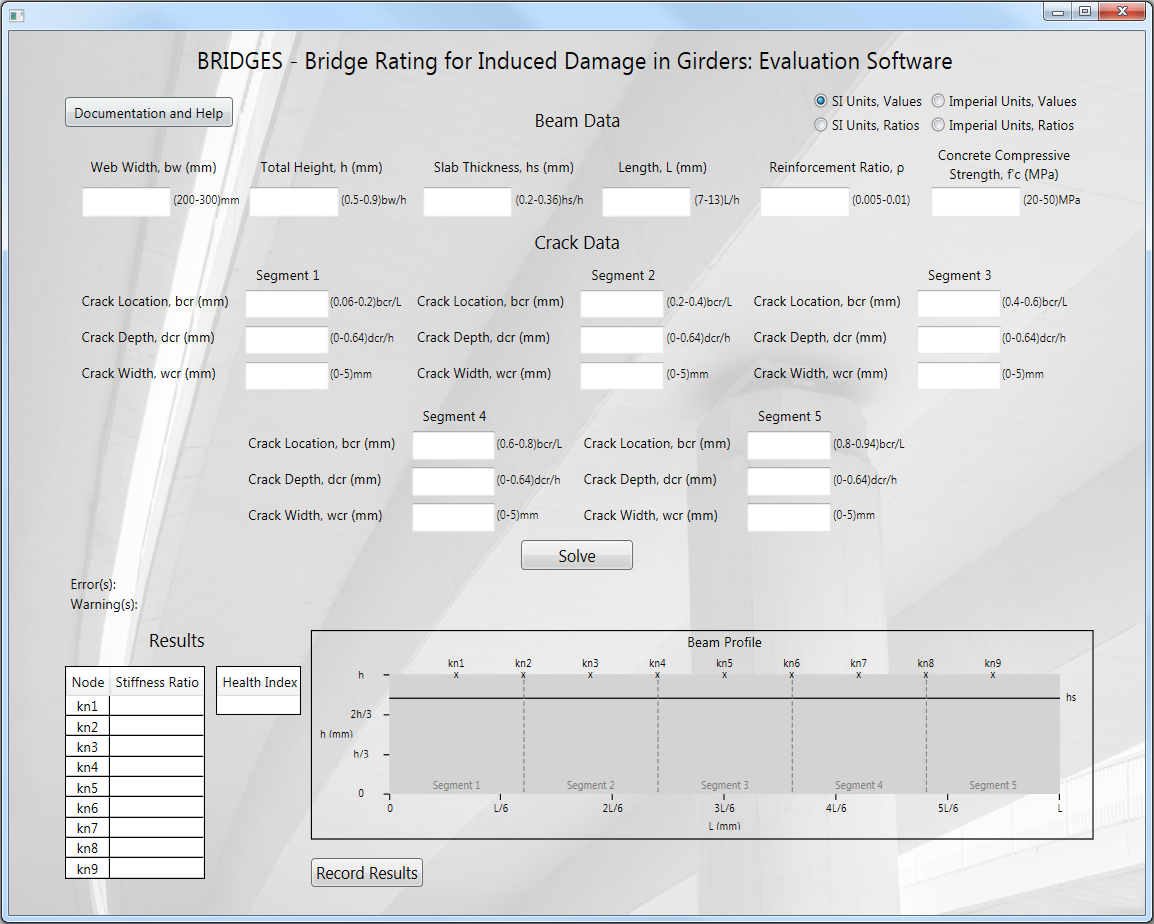 The PI will examine the health index predictions of the mobile App against the visual inspection of three different experienced KDOT evaluators on two multi-girder damaged bridges in a blind study. The results will be compared and contrasted and the findings will be presented in the research report as well as TRB annual meeting papers.

For more information about the study and the status of the tasks, please see the corresponding master's thesis, available here.