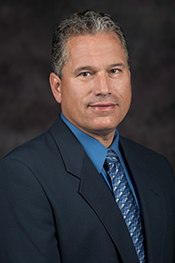 Robert Peterman received his bachelor’s degree in civil engineering from Lafayette college in 1987. He worked as a structural engineer from 1989 to 1992 at Precast Concrete Systems, Inc. in Indianapolis. He became a licensed professional engineer in 1992, and is currently licensed in three states including Kansas.

Peterman then attended Purdue University, where he earned his master’s degree in 1989 and doctorate in 1996. He remained at Purdue as a visiting assistant professor until 1997, and as a post-doctoral research associate from 1997 to 1998. He came to K-State as an assistant professor in 1998 and was promoted to professor in 2008.

Peterman's research focuses on the experimental evaluation of structures and materials, especially concrete, prestressed concrete and fiberglass structures. His specific research expertise is in the evaluation of bond between concrete and various reinforcements. In addition, his research interests include the durability of bridge decks and time-dependent deformations in structures with a goal to advance and preserve the state's and nation's civil infrastructure.

Peterman is currently the lead principal investigator on a $2.2 million inter-disciplinary research grant from the Federal Rail Administration and LB Foster/CXT Concrete Ties. This nationally competitive grant is one of the largest ever received by a faculty member in the department of civil engineering.

Since 2011, Peterman has secured more than $4.5 million of research funding, with more than $3.3 million as principal investigator. During that same time period, he made 36 formal research presentations and authored or co-authored 46 refereed publications and five research reports.

A quality control test developed by Peterman and a graduate student was officially adopted by the American Society of Testing and Materials in 2015 and became a test standard that will be used by laboratories around the world (ASTM A1096 - Test Method for Evaluating the Bond Quality of Steel Wire for Concrete). Another test that Peterman developed referred to as the "Peterman Beam Test" has already been adopted for use by the Precast/Prestressed Concrete Institute.

In 2013, Peterman was honored by being elected as a PCI Fellow by the PCI Board of Directors. The title of fellow is reserved for individuals who have made outstanding contributions to the industry and to PCI. He is one of only about 20 faculty members nationwide who currently are honored with the title of fellow.

In 2014, he received the Outstanding Faculty Award from the K-State student chapter of the American Society of Civil Engineers. He was the recipient of the 2008 College of Engineering Meyers-Alford Teaching Award, and is also a four-time recipient of the Civil Engineering Department’s Chi Epsilon Outstanding Teaching Award (1999, 2004, 2008, and 2010).