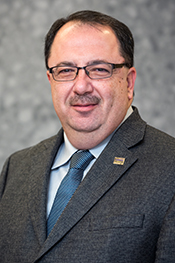 Professor Hayder Rasheed received a bachelor’s degree in civil engineering from University of Baghdad in 1987. After one year of working as a design engineer, he pursued his master’s degree from the same university. He received his master’s degree in 1990. He worked as a structural consulting engineer for two years following his master’s. In 1993, he started his doctoral studies at the University of Texas at Austin. He received his doctorate in 1996 with an emphasis on structural engineering and engineering mechanics. In 1996, he joined Zentech Houston as a senior structural engineer where he worked on the design of offshore structures as well as software development for offshore engineering. In 1997, he returned to academia by joining Bradley University as assistant professor. In 2001, he joined Kansas State University as assistant professor. He moved through the ranks at K-State until he was promoted to full professor in 2013. From 2007 to 2008, he spent a year of leave as a visiting associate professor at the American University of Sharjah in UAE where he taught and conducted research.  Between the years of 2013 and 2015, he received the Thomas and Connie Paulson Civil Engineering Outstanding Faculty Endowment position. He was re-awarded the Thomas and Connie Paulson Civil Engineering Outstanding Faculty Endowment position between the years 2019 and 2021. In 2021, professor Rasheed was named the Darold and Debbie Davis Cornerstone Teaching Scholar in the Carl R. Ice College of Engineering.

Rasheed’s research targets the behavior and nonlinear analysis of structural systems made of advanced composites and reinforced and pre-stressed concrete materials. He complements his analytical and numerical modeling work research with experiments of innovative structural systems and materials. In these areas, Rasheed’s research group developed closed form analytical solutions for the buckling of laminated composite rings and pipelines subjected to external or vacuum pressures as well as the bond slip and deflection analysis of reinforced concrete beams strengthened with Fiber Reinforced Polymer (FRP) composites. Rasheed’s research group also developed numerical frameworks for the confinement analysis of reinforced concrete bridge piers reinforced with lateral spiral and ties as well as FRP wrapping when subjected to extreme load events. Rasheed’s research group also made progress in the area of Structural Health Monitoring of Reinforced Concrete Bridge Girders. They combined Finite Element Simulations with Artificial Intelligence to train a Neural Network Model to act dually in Damage Evaluation and Damage Detection modes. In Damage Evaluation, they devised an objective ANN health index to rate the Bridge Girder Health level based on the cracking induced in the girder. In Damage Detection, the group solved the inverse problem to predict the number, location, depth and width of the cracks in the girder based on external load-deflection measurements at specific monitoring nodes on the girder. His group has also worked on solving the inverse problem of predicting the actual nonlinear constitutive model in metals and composites by using global load-displacement measurements in a deterministic way. Rasheed's group has also worked on solving problems in predicting the buckling loads of columns, plates and beams made of anisotropic laminated composites as well as closed form shear stress prediction in cracked reinforced concrete members.Rasheed introduced the use of aluminum alloy plates to replace FRP in strengthening concrete structures. Recently, Rasheed’s group developed comprehensive computational software for predicting the remaining fatigue life of aluminum overhead as well as steel cantilever and butterfly highway sign structures by building a long-term wind simulation model for the entire state of Kansas. Rasheed is currently working on developing novel Strut-and-Tie models for extracting the full response of reinforced concrete deep beams in addition to establishing testing and new models for FRP strengthened concrete beams anchored with FRP U-wraps and fiber splay anchors. Rasheed received the Best Paper Award for Research on FRP Strengthening of Existing Structures by the International Institute for FRP in Construction (IIFC) through its 6th Asia-Pacific Conference on FRP in Structures (APFIS2017) held in Singapore.

Rasheed authored one textbook for a graduate level course, and co-authored two reference books, three research-driven book chapters, over 90 journal papers, and over 140 conference papers and presentations, which, as of 2022, have resulted in a total of over 1930 citations, an H-index of 21 and an i-10 index of 37 according to Google Scholar Citations. Rasheed mentored six post doctorate fellows, directed 13 completed doctoral dissertations and 24 completed master's theses. Rasheed served the structural engineering and engineering mechanics community in the following capacities: past associate editor, ASCE Journal of Engineering Mechanics; past associate editor, Open Journal of Composite Materials; current associate editor, International Journal of Structural Stability and Dynamics; and numerous conference program committees. Rasheed's work has resulted in the development of the following software packages: KDOT Column Expert versions 1-8, KSU Bridge Rating of Inclined Damage in Girder Ends (BRIDGE), Bridge Rating of Induced Damage in Girders: Evaluation Software (BRIDGES), Damage Recognition Yielding Bridge Evaluation After Monitoring (DRY BEAM), Fatigue of Aluminum Overhead Sign Structure Simulator (FAO-SSS), Wind Simulator for the State of Kansas (WS-SKS) and Fatigue of Steel Cantilever and Butterfly Sign Structure Simulator (FSCB-SSS). Rasheed received the K-State College of Engineering James L. Hollis Award for Excellence in Undergraduate Teaching in 2010, the K-State College of Engineering Myers-Alford Memorial Teaching Award in 2013, the K-State College of Engineering Charles H. Scholer Faculty Award in 2018, the Dean’s Award of Excellence in Research in 2019 and the Chi Epsilon James M. Robbins Excellence in Teaching Award for the Central District of the US.