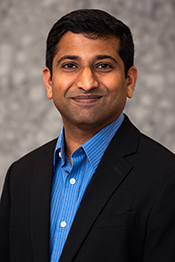 Prathap Parameswaran received a Bachelor of Science in chemical engineering from Coimbatore Institute of Technology in 2003.  In 2004, he came to the United States to pursue a master’s degree in environmental engineering from the Illinois Institute of Technology, after which he obtained a doctorate in environmental engineering in May 2010 from Arizona State University.  From 2010 to 2012, he worked as a post-doctoral research associate at the Swette Center for Environmental Biotechnology after which he was promoted to associate research scientist for the Biodesign Institute at Arizona State University. He also served as a scientific mentor for the startup company ARBSource, LLC in Tempe, AZ.

Parameswaran has authored and/or co-authored one text book chapter, 61 journal papers and over 75 conference papers, which, as of 2020, have resulted in over 4,500 citations and a Scopus H-index of 26. Parameswaran holds two patents on microbial electrochemical cells and membrane bioreactor systems, which he co-invented with his collaborators. He has received several academic honors including the Young Investigator award from the American Society of Microbiology in 2012; Outstanding Assistant Professor Award from K-State’s College of Engineering, and K-State Chi Epsilon’s outstanding undergraduate teaching award. He is an active reviewer for peer-reviewed journals such as Bioresource Technology, Environmental Science and Technology, Water Research, etc. He was on the Scientific and Organizing committee for the fifth international meeting of the International Society for Microbial Electrochemistry and Technology (ISMET). He also serves on the awards sub-committee for the Association of Environmental Engineering and Science Professors (AEESP).